Is It Wrong/Shameful/Crazy To Get Counseling? 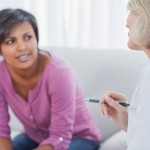 Imagine that you meet a woman who grew up in some extremely poor area, like rural India or sub-Saharan Africa, and she tells you the following story:

“I grew up as one of 9 children.  Our father died when I was 10 years old, of disease, overwork, and poverty.  My mother struggled to survive and barely kept a roof over our heads.  We were grateful to have anything to eat, and many days we didn’t have even that.  Whatever we got, we ate.  3 of my siblings died in early childhood, and there was never enough for any of us. My mother often gave us her food.  As a result of chronic malnutrition I developed rickets.” (Rickets is a disease caused by Vitamin D deficiency.  It leads to softening and weakening of the bones, and various chronic skeletal and muscle problems.)

“Because I had rickets my bones did not grow properly, and I limp and have muscle pain and cramps a lot.  My pelvis developed poorly and I will never be able to carry a pregnancy. I need treatment on a regular basis, and always will.  I go to physical therapy to work on strengthening my muscles, and reducing muscle spasms, and I wear braces on my legs and use a cane at times.  Sometimes I need special medication.”

What would you think about this womans’ need for treatment due to the traumatic results of her early years? Would you feel it was understandable and reasonable? Or would you feel that “She should just move on.”?

Most people would feel quite empathic, compassionate and understanding about this persons’ need for treatment and support as she moves through life.  But why would many of those same people not feel similarly when they hear this story;

” When I was 3 my mother died very suddenly of a stroke caused by an unknown congenital heart defect, while she was giving birth to my younger sister.  I was the middle child of 3, and my  father worked really hard to keep our family together.  When I was 5 he re-married.  Unfortunately, my stepmother was quite physically abusive to all of us, but more to me as the only boy.  She always had excuses for why I had bruises and even 2 broken arms, and my father was so stressed, he didn’t check into it.  She told me that I told anyone, she’d kill my father and I believed her. From the time I was 8 until 13, I was repeatedly molested and raped by a neighbor boy who babysat us.  He also threatened me and my family if I told, and the sexual abuse didn’t stop until the boy moved away.”

“As a result of these traumas I suffer from chronic depression and anxiety.  I take medication, which helps, and I get periods of counseling as needed, which helps as well.  My therapist has given me tools to manage my fears, and those generally work, except around times when I have to deal with my stepmother and father.”

Do you feel compassion for him and for the struggles he has due to his early experiences? Would you think it was reasonable and healthy for him to access treatment and support as he moves through life?

Do you see these two people, and their needs for treatment, differently or similarly?

If your answer is “similarly”, then why would you not get treatment for your depression, anxiety or relationship struggles sooner, rather than later?