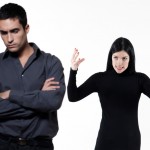 There is an old  1950 movie called “All About Eve”, starring Bette Davis.  In the movie a young Anne Baxter manipulates a lot of people in order to create the life she craves, a life that is everything she wants, at the expense of everyone else.  Her character is named Eve, and that movie may be the origin of the phrase “It’s all about____________.”

Often, when counseling with a couple, one person will tell me that it’s all about their partner.  They mean that their partner gets whatever they want, and there is nothing left for anyone else.

Of course, they fight a lot. Or maybe Craig just works a lot and comes home late every night, where he sullenly sits in front of the TV and drinks.

Another example, with another couple who we’ll call John and Sean, (again, purely fictitious) is that Sean wants an open relationship, meaning that Sean gets to have sex with other people. John doesn’t want that, but he’s afraid that if he protests too much Sean will leave and he’ll be alone. So, in retaliation, he “forgets” to buy the groceries, or sets up a situation where he can embarass Sean publicly about his weight.

How did it get this way?  One day in the not too distant past, this couple met, fell in love, and made a commitment.  Back then they would have said they had a partnership.  Now, if I ask if this relationship is a partnership, one person says “absolutely” but maybe looks a bit uncomfortable, and the other person rolls their eyes and says nothing.

Of course, in a healthy relationship there is always a balancing act between individual and partner interests.  This has to be negotiated, another skill which partnerships must develop.

If these issues resonate for you, maybe this is the time to get some high quality couples counseling!